Andrew Jeffrey’s been working with Independent Arts Projects between June 2018 and is finishing up in March 2019.  Andrew’s been really invaluable to IAP in these embryonic months.  He’s worked hard and brought good humour to lots of new work situations.  We will miss him loads.

Here he writes about his time working with IAP and what he’s learnt in that time:

Thanks to the support of Federation of Scottish Theatre I have had the privilege of working alongside Mhari for the last six months as Independent Arts Projects Assistant Producer. As I begin to look back and reflect on the experience it’s hard to believe just how much has happened in such a short space of time and how much knowledge I have gained.

Jumping back to the beginning of this placement, I was straight into the thick of things nervously phoning venues attempting to book in tour dates for Puffin. I have always been extremely nervous talking on the phone – no idea why but as the phone starts ringing I can feel myself breaking into a sweat – so I was keen to build my confidence and get better at talking on the phone and there is no better way than jumping straight into it. Mhari gave me some excellent advice on a few little things to do in advance of picking up the phone that helped me feel more prepared and less nervous and I very quickly started to feel less anxious about making those phone calls, unless I have to leave a dreaded voicemail …

Before long we were hurtling towards the Fringe and things really stepped up a gear. This was an amazing opportunity to experience the festival for the first time from the other side and to see just how much goes into making a fringe show successful. The Fringe can feel overwhelming in a lot of ways but it is filled with opportunities to learn and meet with new people and , you just have to be willing to jump in fully with both feet – which I most certainly was! One of the key things that Mhari taught me during this time was how important it is to look after the artists you are working with during these busy times. As a producer you have a responsibility to the welfare of the staff working on the project so it is important to touch base regularly and keep everyone’s spirits up. There was no stopping for breath after the Fringe as we were straight into tour logistics and support for both NESTS and Puffin. 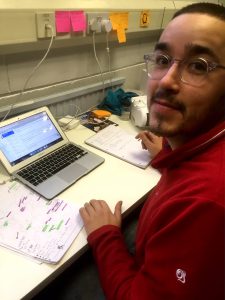 During my time with IAP I have worked across five productions, supporting 66 performances across Scotland and worked with an inspiring group of artists, creative, production staff, designers that have all inspired and helped me to grow throughout this placement.

Before joining Independent Arts Projects I was starting to feel a little overwhelmed and lost, I really had a lot to learn to improve my skills and build confidence in myself as a Producer. But Mhari has been so generous with her knowledge and expertise and I am just trying to soak up every piece of information I possibly can to support me in my own professional practice as a producer. Mhari has been so patient with all my silly questions and has pushed me to experience new things and really involved me in every aspect of a project. I still have a lot to learn but my experiences with Independent Arts Projects have certainly taught me so much and I now feel more prepared and ready to approach future projects with more confidence and a much clearer idea of what my role is as a Producer.

All I really have to say is thank you so much to Mhari for this amazing opportunity and to all the artists, production staff, venues and the rest of the team at Independent Arts Projects – thank you for making me feel so welcome over the last six months, I’m really going to miss working with you all but look forward to seeing what 2019 brings for Independent Arts Projects, I know it’s going to involve lots of amazing things!