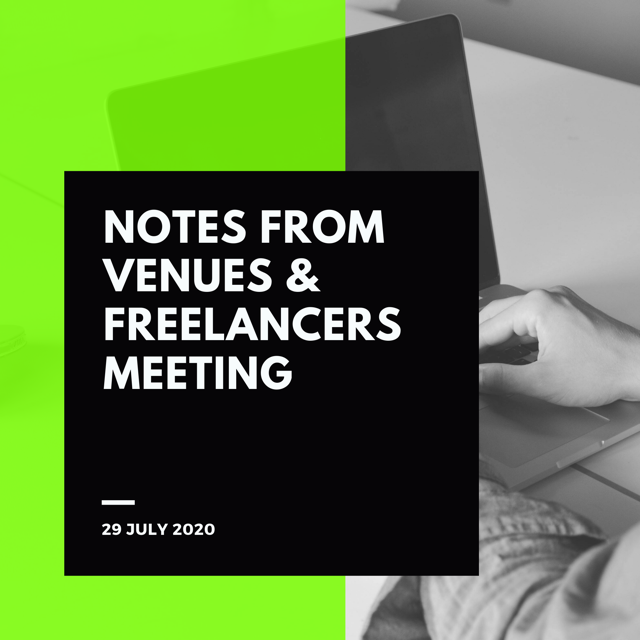 Context – This event came out of a conversation with freelancers who felt isolated and frustrated at not knowing what venues were thinking or having to consider (and how that would impact them in their careers). One freelancer described the situation as being on a “long haul flight without knowing where you are going or how long you’ll be up in the sky”.

The Meeting was facilitated by Caitlin Skinner.
Welcome music was provided by Greg Sinclair.

These notes have been anonymised – removing all names, cities, & local authorities.

We wanted to create a space where everyone could speak honestly about their situation in order to develop our shared understanding of what is happening to our sector.

Questions issued in advance to the venue representatives (submitted by attendees).

NOTES FROM THE MEETING

Theatre buildings being repurposed or responding to needs

Staff on furlough / coming back to work

Equalities, Diversity and responding to the Black Lives Matter movement

Q: I wondered what venue leaders are viewing as priorities for support from the emergency funds that have been announced? I know there’s no information yet on what the larger sum will cover, so apologies if that’s tough to answer.

Q: Are venues ring-fencing cash within the emergency funding for freelancers? And, if so, will this ring-fenced funding focus on short-term or long-term projects (or both?). And, finally, how would such funding be allocated (i.e. via open calls and / or through commissions)?

The three priority areas were:

Q: I’m aware that even in this chat today we’re a group of predominantly white, middle class, able bodied people. So, what I’d like to know is what are organisations are doing to diversify the artists they engage with in terms of race, sexuality, disability. I’d also like to know what your strategies are regarding digital poverty.

Q: From my perspective, I don’t see us represented in the programming, in hiring, or in education, and I’m hearing talk of outreach and reaching out to other communities, disadvantaged communities and I think all that taps into the Black Lives Matter energy, and I’m wondering when your circle doesn’t include us, how you intend to actually facilitate those changes?

A: On Digital Poverty

A: On Diversifying the artists, we work with

Q: Has no theatre been able to make a saving through furloughing staff or raising funds through ticket buyers donating the price of their ticket back to the venues that they are then able to pivot and employ freelancers?

QUESTIONS WE DIDN’T QUITE HAVE TIME FOR

REFERENCES from chat & mentioned in conversation during the meeting: