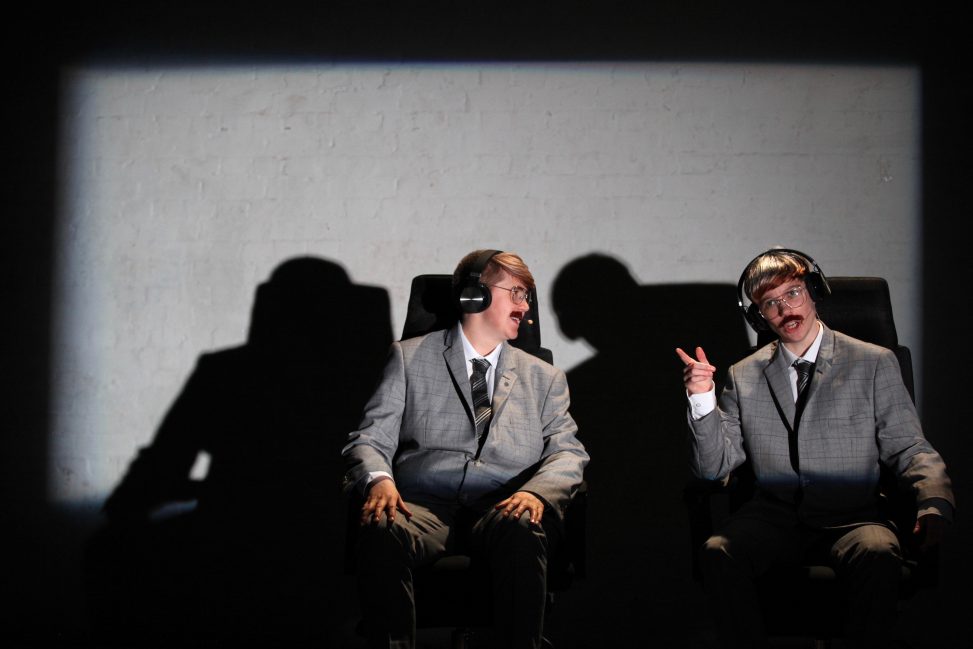 Rosana Cade on the making of Moot Moot

How was the concept for Moot Moot formed?
In 2017 I was commissioned by Fierce Festival and The Marlborough Theatre in Brighton to create a new work. At that time I was keen to develop my collaborative practice with my partner, artist Ivor MacAskill. Up until this point we had mainly collaborated in a more DIY fashion via our band Double Pussy Clit F*ck. ﻿

We entered a process that began as a queer exploration of ‘good’ and ‘evil’, questioning the ways in which these concepts are used by the media and those in power to control and divide communities, in a time of increasing political polarisation. Through this exploration we encountered radio programmes such as ‘The Moral Maze’ and ‘The Jeremy Vine Show’, and developed a fascination with the nature of debate and opinion in contemporary society via radio phone in shows, and endless social media streams. We were interested in what it is to engage with people who have opinions that are different to our own, and whether this can ever lead to a change of opinion, or whether it only bolsters our existing standpoint. We became compelled to explore the idea of the echo chamber or the bubble, and both the value and pitfalls of surrounding yourself with likeminded people. We were also reflecting on our growing obsession with expressing opinion, with sharing everything that is happening, from the daily mundane to the global horrific. Ultimately, we were interested in experiences of connection and isolation in contemporary society, and the desire/attempt to be heard, to reach outside of one’s own mind. We were trying to create a work that spoke to the ‘feeling’ of scrolling through social media streams, hourly news updates, endless cyclical debate, and repetitive daily communications.

What appealed to you about taking on the characters of radio talk-show hosts in particular?
Early in our research we came across these two American talk radio hosts in a 1980s interview about Alan Berg, a confrontational talk show host who’d been murdered. They were both called Barry, and wore almost the same outfits, although they had different shows on different stations. We found their similarity humorous, but also it spoke to us of the dominance and the power of the straight, white, cis-gendered, male voice on the radio, particularly at that time.

When considering debate and opinion – what kind of subjects are debatable, and who gets to partake in debate – it is important to ask questions of identity, privilege and power. Who has the luxury of sitting and musing calmly on subjects on high brow Radio 4 programmes, whilst for others, those subjects are the difference between life and death – no time for debate? From our personal experiences this relates to discussions around sexuality and gender, and the frustration that arises when we hear people casually debating human rights that have no direct impact on their own life, whilst others are screaming from the sidelines ‘Let me live. This is not a debate.’

We wanted to embody this unchallenged jovial voice, the niceties, the mundanity, the greyness, the ‘inoffensiveness’ of the Southern, middle class, English male accent that is understood as natural, normal, or neutral in the UK, and through our repetition and our performance reveal its own absurdity. The performance isn’t a straight up parody or satire of these two characters though, and isn’t focused on mocking this identity. Actually something that shines through the work is a fondness and a tenderness. In the process we were constantly talking about the issue of connecting to those who are different to us, who are ‘outside’ of our bubble. In some ways the act of embodying this older straight male character was an attempt to place ourselves in their shoes, and to begin to understand their vulnerability. It is something more complex than othering them and blaming them.

We are interested in radio as a form because we know these radio waves are always there in the air. All these voices, all this noise, so many different channels constantly broadcasting out of tiny rooms, whether anyone is listening or not. We imagined ourselves as receivers and transmitters of information, sticking something into the air and catching whatever radio wave is floating by. We imagined human beings as highly complex machines designed to receive and transmit information, with a synthetic sense of self and authenticity. So these talk show host ‘characters’ sit somewhere between human and robot – their patter is eerily familiar, and yet somehow seems to be constantly malfunctioning as the broken mechanics of mundane chit chat reveal themselves.