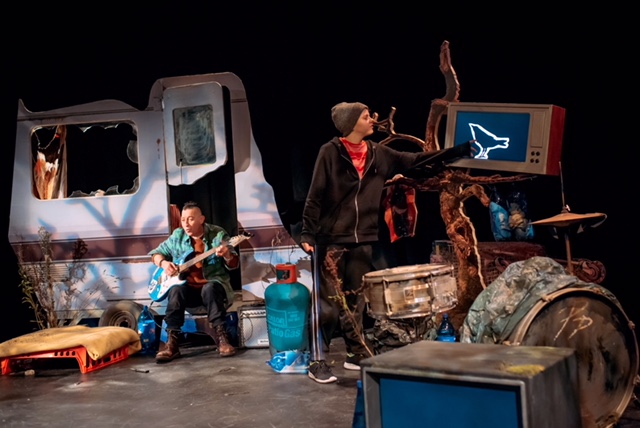 Frozen Charlotte and Stadium Rock are thrilled to have been nominated for the Best Production for Children and Young People  for NESTS at the 17th annual Critics’ Awards for Theatre in Scotland (CATS).

The winners will be announced at Tramway on Sunday 9 June 2019.
The full shortlist can be seen here.

NESTS was a co-production between Frozen Charlotte & Stadium Rock and was produced by Independent Arts Projects. The production was supported by Creative Scotland and toured to 8 venues across Scotland.

NESTS questioned how we treat the most vulnerable people and toured Scotland alongside Hatchlings: a series of creative learning opportunities and post-show discussions around the themes of the production. The tour took place during 2018: Scotland’s Year of Young People.

“Beautifully acted, imaginatively political and emotionally compelling, this little two-hander is a resonating piece of theatre”
★★★★ Mark Brown, The National / Herald on Sunday

“A bold, thought-provoking glimpse into a world most of us would rather pretend doesn’t exist, but can’t be ignored.”
★★★★ Kelly Apter, The List

“A true tragedy for our times, brief, unpretentious, but brilliantly conceived and beautifully made.”
★★★★ Joyce McMillan, The Scotsman